The economy in Washington County continues to show strength across the board. Unemployment
rates are down, population growth is near record high, and the demand for commercial real estate
continues to be strong. Unemployment dropped from 3.3% down to 2.5-2.6%, matching the state of
Utah average, and well below the national average of 3.6%. This drop in the unemployment rate
pushed average wages higher 3.5-4% year over year. Population growth is up anywhere from 4-
5.6%, depending on the data source. This population growth has led to increased demand for all
sectors in commercial real estate.

Looking forward, we expect this year to be a slower version of 2018 and 2019. Our projection is for no
recession this year, but as with all projections, there are things we need to pay attention to. There are
some indicators such as job growth, growth in average wages, rate of job growth, growth in sales, etc.
that have slowed slightly over the last two quarters. The numbers are still healthy, but the rate of
growth has simply started slowing down.

While we experienced a generous year over year reduction in unemployment, the wage growth was
modest. Most of the growth came in the lower pay positions in hospitality services and retail trade,
causing slower wage growth even while unemployment fell significantly. We will be watching these
indicators more closely over the next few quarters to see if this trend develops further. On a positive
note, population growth rate is expected to continue, bringing additional demand for space to the
market.

• Vacancy dropped from 4.35% to 3.11%
• Annual net absorption of 450,000sf
• 350,000sf of completed construction matching the historical annual average
• Average rents are up 2.25%
• Several large buildings have or will have availability in the coming 18 months

The industrial market in Washington County has been exceptionally strong over the last several years
and continued that trend in 2019. Vacancy fell from 4.35% to 3.11% due to a few shorter term,
medium size leases of 65,000sf and 55,000sf in the Ft. Pierce area. Removing the two large actual
vacancies of Viracon and the old sleeping bag factory, drops the market vacancy to under 1%.

Beehive Industrial, the largest spec industrial project in the last 11 years in Washington County has
been fully leased. Average asking net rents increased 2.25% year over year, down from a 22%
increase from 2017-2018, but still good. Weighted average asking net rents decreased slightly year
over year. Net absorption was 461,851sf, or 4.51% for the year thanks to full occupancy of all new
construction added and a reduction of the overall market vacancy.

New projects completed in 2019 included 71,000sf for Ram Company, 66,000sf for
Riverwood/Henriksen Butler,32,000sf for a UPS distribution facility in Ft. Pierce, 22,000sf for
Kenworth Sales Co off Exit 2, and 20,000 for the new Kenworthy Monuments building in Ft. Pierce.
Paparazzi is adding another 260,000sf to their new facility off Exit 2, with construction already under
way and expected completion in Q1 2021. Smaller buildings comprised around 86,000sf of new
construction off Washington Dam Road, mostly in the White Sage Industrial Park which is now almost
completely built out. 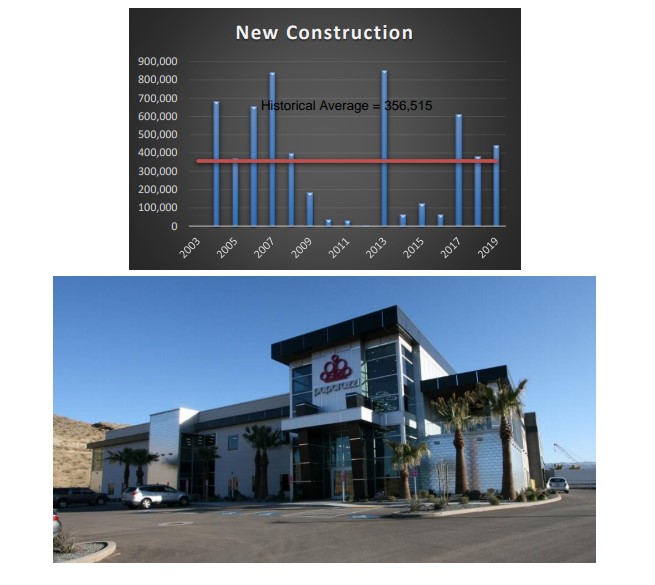 With most indicators showing that it is late in the economic cycle and with an election year in 2020,
we expect that growth will continue, albeit at a slightly slower pace. Lease rates have rapidly
increased over the last several years and vacancy has been at or near historic lows for quite some
time. Some slowing is to be expected. A gradual subsiding would be a healthy response to avoid an
overheated market while still maintaining an active commercial real estate market.

When this economic expansion ends, we don’t expect that it will be anything as severe as the 2008-
2010 recession. New spec construction has been very limited, vacancy is extremely low, and there is
continued demand. Industrial should be one of the strongest sectors through the next several years,
even though a slowing period, due to onshoring of manufacturing returning to the US and the
continued growth of e-commerce and last mile fulfillment.

One area of caution in our market would be in the larger building space. There are a handful of larger
industrial tenants who have or will be vacating the market, but still have remaining lease terms in
place on buildings. This shadow vacancy is not reflected in the current vacancy numbers. Unless the
market absorbs these larger spaces in 2020, we could see a bounce the vacancy in 2021.

Population growth in Washington County leads to an increased demand for medical and
professional services, which are the primary occupiers of office space in this market.
The medical office sector accounted for a good share of the absorption, with the
professional services and tech sectors also growing. Unemployment numbers are at
2.6% at year-end 2019, which is a .4% drop from the same time last year.

The St. George office market continued to show signs of strength in 2019. Vacancy
jumped up a bit to 5.5% as absorption kept up with new construction but did not outpace
the conversion of a large vacant retail center (1506 S Silicon Way 31,811sf) to office
space. That property alone represents 1.3% of the market inventory. Regardless, the
vacancy rate remains very low and near the 10-year low of 4.1% recorded mid-year
2018.

Average asking lease rates check in at $1.20 NNN at year-end, which is down slightly
from the $1.25 NNN mark posted at year end 2018. There are a few big blocks of
space on the market, some immediately available and others either under construction
or currently tenant occupied. But finding quality small or medium size spaces is still
quite a challenge for tenants looking for space. This is true particularly in the Class A
sector in the central business district. This strong demand for space continues to put
upward pressure on rates and prices.

A handful of buildings made up the 74,210sf of new construction that was completed in
2019. Most notably is the Mesa Medical building at 31,400sf. MRWs 5,000sf building is
a small but impressive visual addition to a downtown that has seen constant
revitalization the past several years. There is currently 152,563sf under construction
including Tech Ridge (60,000sf), SunRiver Commons (24,000sf) and the Revere Health
building (68,351sf). In addition to those that have gone vertical, there are a few more
significant projects in the planning phase or “almost pulling the trigger” phase.

Investment activity in the office sector has cooled off a bit in 2019, but demand for
investment-grade buildings and tenants remains high. 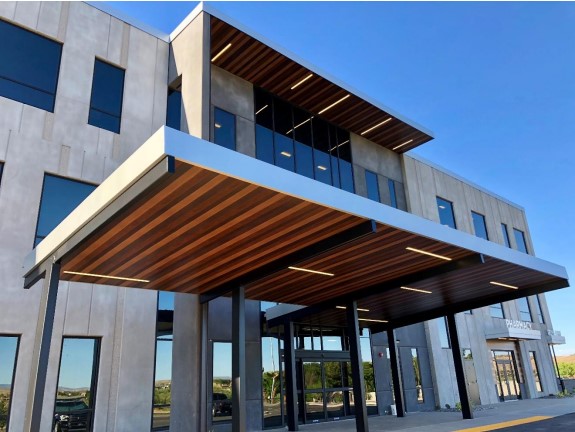 Market conditions are expected to hold steady and even tighten until fall of 2020.
Although this relative mountain of new construction casts a shadow over the market, the
effects of that new construction will not be felt until the buildings are completed and the
big tenants start vacating their spaces (Printer Logic for example, estimated early Fall
2020). By year-end 2020 we expect to see a shift in the market with increased vacancy
and tenants having more choices for space. 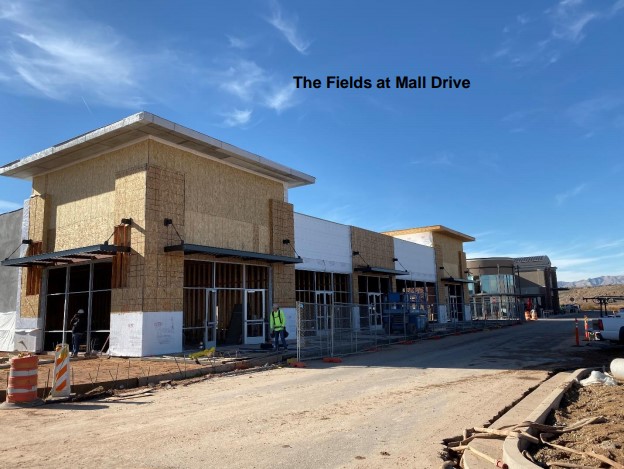 Retail lease rates have remained strong this year. Grocery anchored retail and existing
space under 5,000 square feet continued significant growth this year, and, we expect
that to continue. New smaller retail buildings continue to go vertical across Southern
Utah. There has been no big box activity, however a second location of Ross is back
filling a space in the Kohls Center. City View, Zupa’s, Good Burger, a second location
for Royal Thai, a second location for Chick-fil-A and Uprise Adventure Park in the mall,
will be coming this year. There are several retail projects currently under construction
including multi-tenant retail buildings at Commerce Point bringing new restaurants to the
market, along with Chick-fil-A. New restaurants are also coming next to Lin’s grocery
store on Mall Drive & 3000 East. 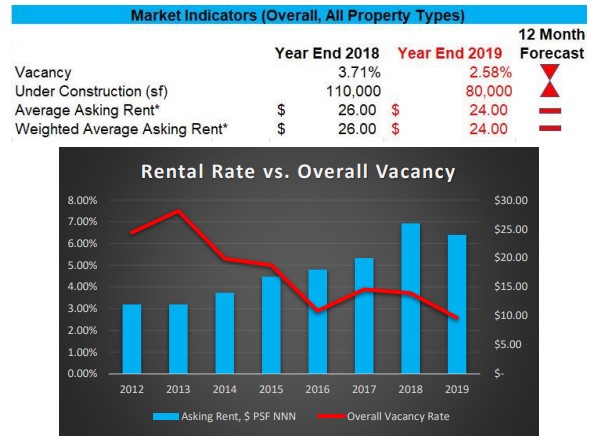 We expect tempered growth in 2020. Look for continued expansion in the smaller retail
segments such asgrocery anchored retail, restaurants, and small retail spaces. We
anticipate vacancy, lease rates, and transaction volume staying relatively stable. Online
retail will continue to undermine the competitiveness of physical stores in 2020. Retail
growth will be affected by social media apps such as Facebook, Instagram and TikTok,
as well as better digital payment systems. Retailers and consumer goods manufacturers
will need to adapt quickly to changing local conditions, shifting suppliers and closing
stores as demand patterns change. 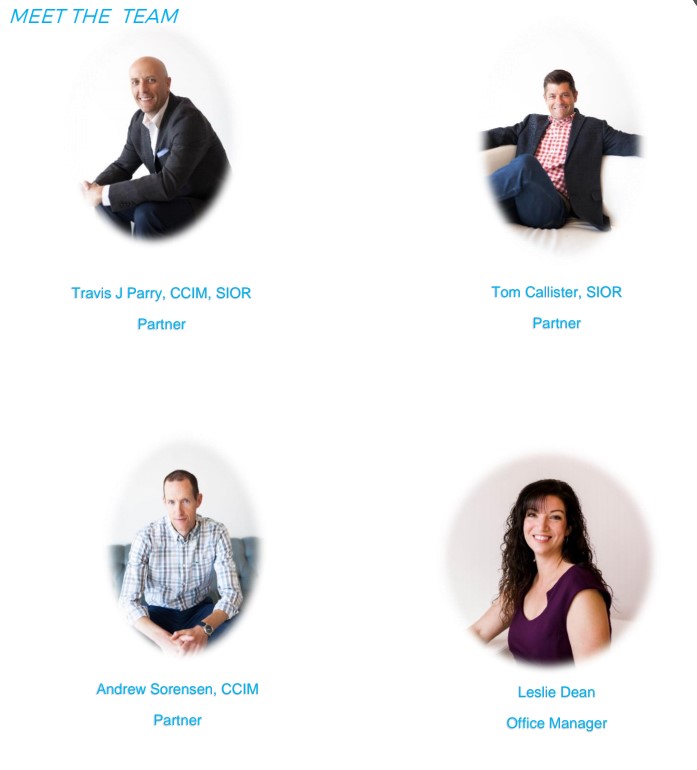 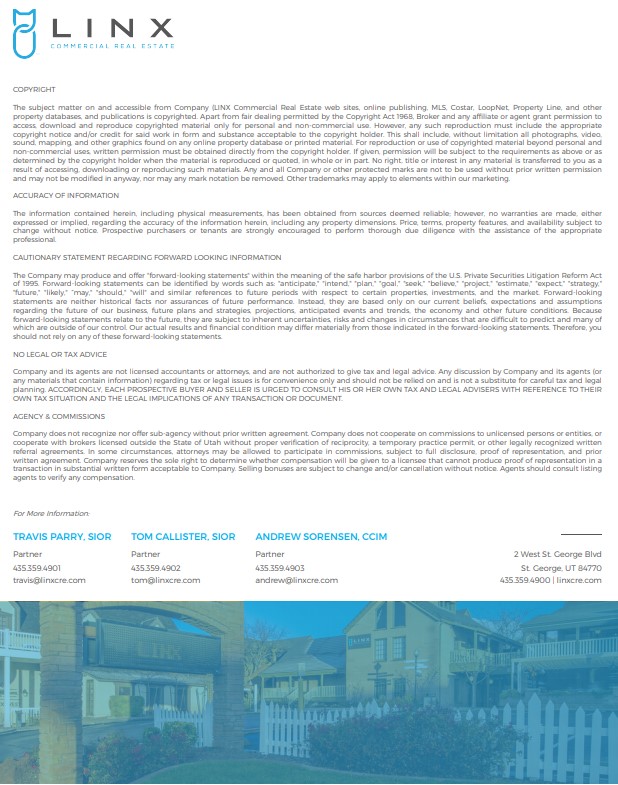