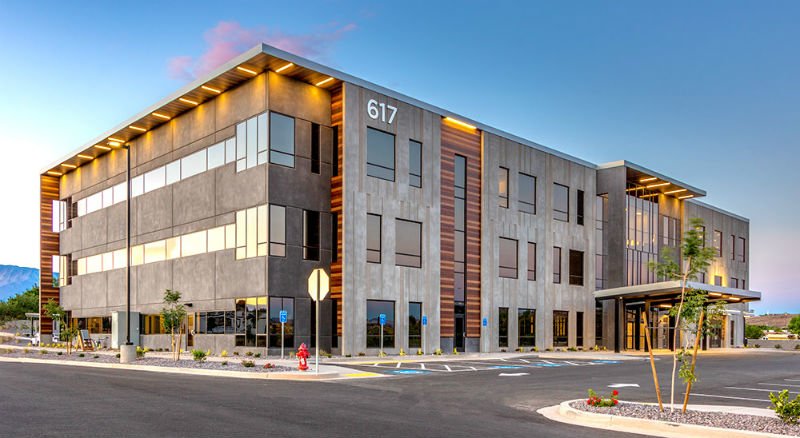 The industrial market in Washington County has been exceptionally strong over the last several years.

Vacancy rose from 1.9% to 4.35% due to the addition of some spec space at Beehive Industrial, Viracon going dark, and the old sleeping bag factory still mostly vacant.

Net absorption rose for the year thanks to near full occupancy on all new construction added during the year which offset any loss coming from increased vacancy.

Washington County continues to show solid signs of growth in manufacturing and distribution related industries. Unemployment is hovering around 3.3- 3.4%, mostly flat year over the year.

The local unemployment rate is a little higher than the 3.2- 3.3% Utah average and just below the national average of 3.7%.

The continued low unemployment rate has pushed average wages higher 5-6% year over year as competition to attract and retain employees continues to increase.

This is nearly double the historical average of 348,000sf. Currently, there is about 380,000sf under construction expected to be completed within the first half of 2019.

Over the last 16 years, only four years registered higher new construction than 2018.

Much of the new supply added was an expansion for existing companies including:

Properties that are now under construction include:

Paparazzi is expected to add another 160,000sf to their new facility off Exit 2, with construction commencing Q1 2019.

For the first time in nearly 10 years, a large spec industrial project was completed with Beehive Industrial adding 151,000sf of warehouse/distribution space in the Ft. Pierce Industrial Park.

Only 20% of the space remains since the property completed construction in the first quarter of the year.

Nationwide, demand has outpaced supply for the last nine years by just under 100 million square feet. This has caused the nationwide vacancy rate to hit record lows around 4.2-4.3%.

Even though it is late in the economic cycle, we still expect growth across the major asset classes, including industrial, through 2019.

We expect to see a large amount of new industrial construction complete in 2019, but temper somewhat leading into 2020 as the slowdown in new home construction, the concern of a 2020 recession, the threats of tariffs, and rising interest rates moderate new construction back to the historical average.

Several national players are considering relocating from other markets to Washington County.

Increasing construction costs will continue to create upward pressure on lease rates. This will also keep spec new construction limited to smaller industrial spaces with metal construction being the material of choice for smaller buildings thanks to cost-savings over concrete tile or masonry.

We expect lease rates to climb 5-10% and overall market vacancy to remain around 3-4%.

The Washington County office market continued to improve in 2018. Vacancy fell to 4.3%, which is the lowest office vacancy rate in the past 10 years.

Average asking lease rates jumped up to $1.25sf NNN, which represents a 13% increase from year-end 2017. The prolonged recovery and shrinking vacancy have caused a lack of viable spaces on the market for sale or lease.

This is true, particularly in the Class A professional sector. These factors are putting upward pressure on rates on prices as buyers and tenants compete for the best spaces in the market.

Washington County continues to show solid population growth leading to an increased demand for medical and professional services, which are the primary occupiers of office space in this market.

Medical office expansion accounted for the lion share of office absorption in 2018.

However, tech companies have also shown remarkable growth this year, in spite of the historical challenges faced by tech entrepreneurs to keep their companies here once they reach a certain size.

Unemployment is hovering around 3.0%, down one-quarter of a percent from last year.

Riverfront Medical Center, a 57,000sf tilt-up concrete building made waves with its best in class finishes and amenities, won awards for its cutting-edge yet cost-effective design. They also set a new standard in the market for Class A Medical Office.

The LINX team developed the project from start to finish, from the land acquisition and entitlements to the construction management and leasing.

Riverfront is the largest private medical office building ever developed in Washington County and is the first building in a multi-building medical campus.

A new 21,100sf building was completed on South River Road with Stevens-Henegar as the anchor tenant.

There is currently 29,000sf of additional medical office under construction. With projects totaling more than 200,000sf in the planning phase pushing towards vertical construction in both the tech and medical sectors.

Investment activity in the office sector has cooled off a bit in 2018, but demand for investment-grade buildings and tenants remains high.

We expect the improving trend to accelerate through 2019 with vacancy decreasing and lease rates improving further. 2019 will be a pivotal year for the market with such a large potential new construction inventory.

But regardless of what happens with new construction, asking lease rates should increase by another 10-15% over the next 12 months.

Retail lease rates are leveling off and we expect that to continue through 2019. Grocery-anchored retail and existing space under 5,000 square feet realized significant growth and we suspect that will continue as well. New smaller sized retail buildings continue to pop up all across Southern
Utah, including:

There are several retail projects currently under construction or in various planning stages including:

We were hoping to see some activity from big box retailers, but no such luck. WinCo is still planning for a Southern Utah location, however, we have not seen concrete plans yet.

We expect retail to remain strong through 2019. Grocery-anchored retail, restaurants, and smaller spaces and will continue to experience the most growth.

We expect that the vacancy will remain in the mid to upper 3% range through 2019, with lease rates remaining stable.